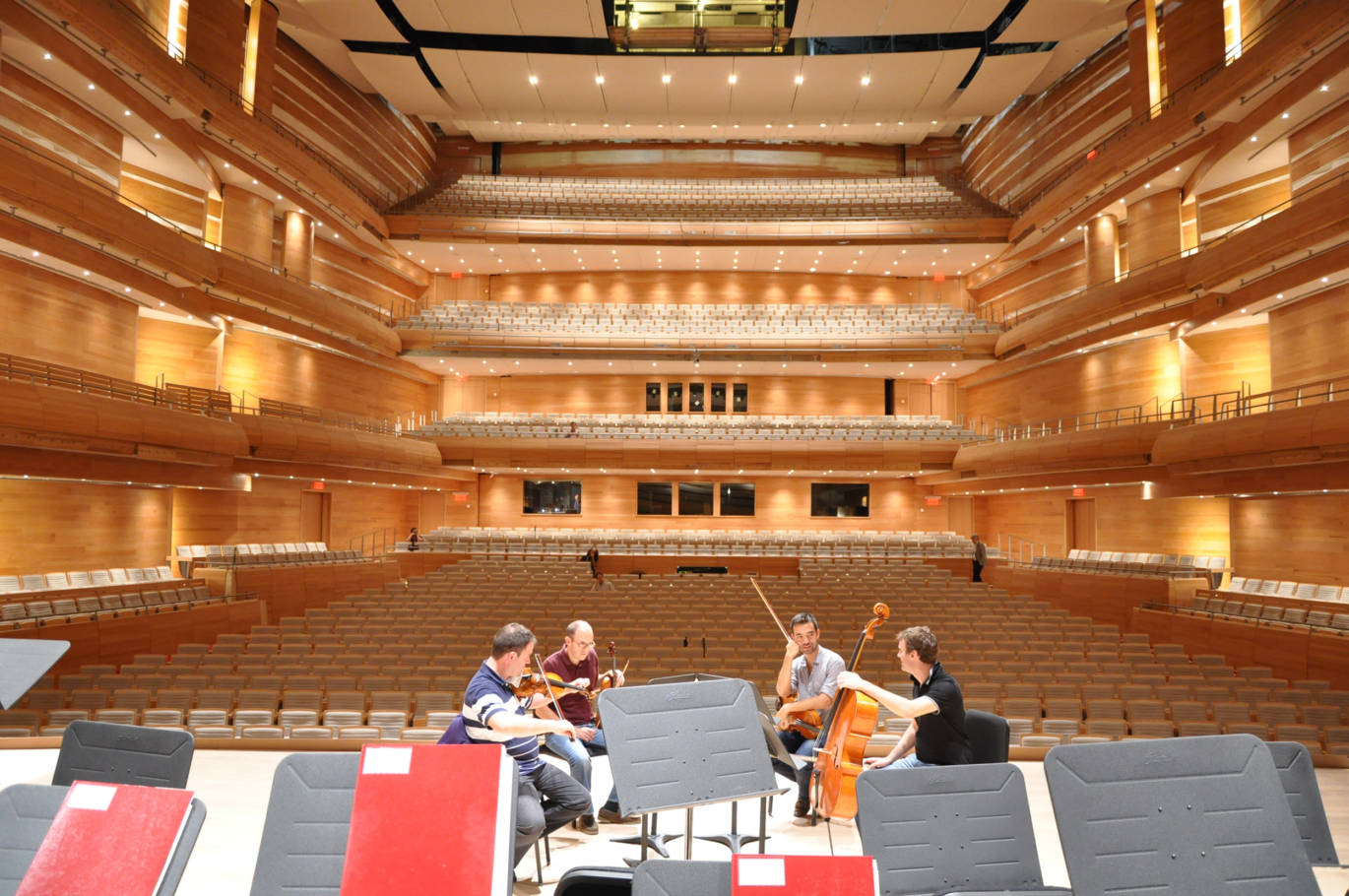 On 7 September 2011, the Montreal Symphony Orchestra (OSM), led by Kent Nagano opened its season in its new home concert hall, situated on the northeast corner of the Place des Arts.

On opening day the hall was cristened “la Maison Symphonique”, replacing its provisional name “l’Adresse Symphonique”. With recordings winning major awards and nominations, and a highly successful recent European tour, the OSM is clearly a major player on the world stage, and a new home completes the foundation for a bright future.

London acousticians Sound Space Design, worked with architects Aedifica and Diamond + Schmitt to create the artistic acoustical design, bringing life the sound of the performers, while satisfying the requirements prepared by the Cultural Ministry’s adviser Artec. Working with the architects and and engineer/contractor SNC Lavalin, Sound Space Design (SSD) has guided the design team on the auditorium form and every detail to ensure the acoustical excellence desired and deserved by the OSM and the concertgoers of Montreal. The new 2,100 seat hall creates an intimate performance experience with light colored wood materials and seating surrounding three sides of the concert stage.

This engages our unique approach for success: collaboratively integrating acoustics into the architectural solution so as to enable the architectural team to do their best work, with the greatest possible value to the performers and audiences for the money spent.

Our role has been

While the tall, narrow room proportion owes its heritage to the classic “shoebox” halls, we moved beyond the shoebox to create a unique and contemporary design for Montreal. The concert hall design is a composition of curves of varying size, yet with an architectural unity. The carefully dimensioned convex curves spread the sound to mix the sound and to create a warm, lush timbre. The hall is tall and narrow with multiple balconies, in order to sustain resonance and involve the audience in the sound. Audience seating wraps around the performance platform, and this helps to balance the loudness and timbre of the orchestra as well as giving the part of the audience behind a great insight into the music making. Equally important, the balcony audience is like a string of pearls around the hall, tying the performers and audience together in a unified experience. The walls are large, gently convex panels, designed to spread the sound throughout the hall, to create an intense and immersive sound, drawing the audience into the performance. The scale and curvature of the panels are carefully tailored to refine the frequency spectrum, and therefore the timbre of the sound.

The top of the room is crowned by a massive, multipart suspended ceiling suspended from the roof. Development of the design with DSAI has brought architectural rigor and acoustical refinement. Setting the ceiling low allows the room to sound like a smaller hall, more suitable for early music and chamber music. Setting it high creates greater reverberance and bloom, and a sense of a grand space that better fits broad textures and slower musical movement. There are settings in between to vary the balance of clarity and resonance. The ceiling panels are shaped in pillow forms to spread and smooth the sound.

Proposed initially in the Employers Requirements as a means to achieve variable height, we extended and refined the acoustical sophistication.  With gaps between the ceiling panels the volume above the ceiling is a partially coupled chamber, with dimensions, materials, and openings tuned to extend the length of resonance slightly, but without reducing clarity. This will be a very good fit to the OSM sound. With his experience using coupled chambers while a Principal at Artec (acoustical designer on the halls in Lucerne, Singapore and West Palm Beach, among others), Essert developed his and the company’s skills with coupled volumes. Later, in Hall 1 at the Sage Gateshead in England (1997-2004), Essert created coupled volume above a multipart moving ceiling, using no additional room volume. The Sage Gateshead has been a great success, and became a key reference for SSD’s work on la Maison Symphonique. Volumes, openings between ceiling panels, materials, coordination with lighting, and location the variable acoustic curtains were all informed by Essert’s experience in Gateshead and Lucerne, Dallas and Singapore.

The materials used in the hall are traditional and Canadian, as much as possible. Wood and plaster are used throughout. The wood and plaster are fully bonded to the solid masonry with specially selected soft glue and a high density of nails to preserve the bass sound energy in the room and achieve a warm resonance.

Three-dimensional shapes range from the large, convex wall sweeps to human scale columns to hand-size gypsum tiles are embedded in the wall. The family of curves and richness of architectural scale helps to develop a richness of sound: each of the different architectural scales reflects and spreads sound over a different part of the frequency spectrum, together covering the entire range. With Diamond + Schmitt and Aedifica SSD has taken advantage of the fundamentals of physics to combine relief protruding from the wall with relief recessed into the wall. Matthew Lella and his team at DSAI developed a series of beautifully shaped plaster inserts in a modular, cost effective system that scatters sound over different frequency ranges. This creative approach brings a richness of sound and richness of architecture.

The stage floor is carefully detailed to help the performers feel each other and to project the warmth of the basses and celli.

While at Artec in the early 80’s Essert outlined the case for silence in musical and theatre performance, and called it N1. Since then, this “gold standard for silence” has become a goal on all world class projects of Sound Space Design and Artec. It states that the background noise in the auditorium is not audible – it is below the threshold of hearing. N1 noise level is achieved through attention to detail in the engineering and construction of the building. On this project SSD has been responsible guiding the noise control design, collaborating in detail with the architects and SNC engineers; Artec has been responsible for reviewing the design and approving that it will meet the N1 target.

Most of the noise control design is not visible to the audience, but is hidden in the walls and in the heating and air conditioning system. The concert hall rests on hundreds of rubber pads to isolate it from the metro, the underground parking garage and adjacent road vibration. The glass areas on the east side of the façade are heavier and deeper than domestic windows in order to keep the traffic noise out of the hall.

Ventilation and plumbing noise is silenced through careful routing of ventilation ducts and pipes, installation of sound traps and insulation and isolation of equipment on resilient spring and rubber isolation mounts to decouple it from the building structure.

The auditorium acoustic has been designed to be the best possible sound for the OSM, other visiting orchestras and chamber music. But various features have been included to give acoustical flexibility – to achieve very good acoustics for other types of use – jazz, pop, speech events and rehearsals. The movable ceiling elements can be lower over the stage for greater intimacy as outlined above. They can be raised out of the way to make space for a pop concert lighting rig. They can be adjusted to allow the sound to breathe more broadly, as might be appropriate for a Strauss tone poem or set for a clearer, faster response as one might want for a Mozart symphony or a vocal recital.

The hall will have a characteristic sound signature that ties together across all the variable settings. Moving the ceiling and curtains will change the sound, but it will always have the same essence, because the acoustics are integrated into the geometry and detailing, not applied only to the surfaces. The new concert hall will allow the OSM to show its true colours — timbres heard on OSM tour concerts to great halls around the world, but as yet never heard in Montreal.