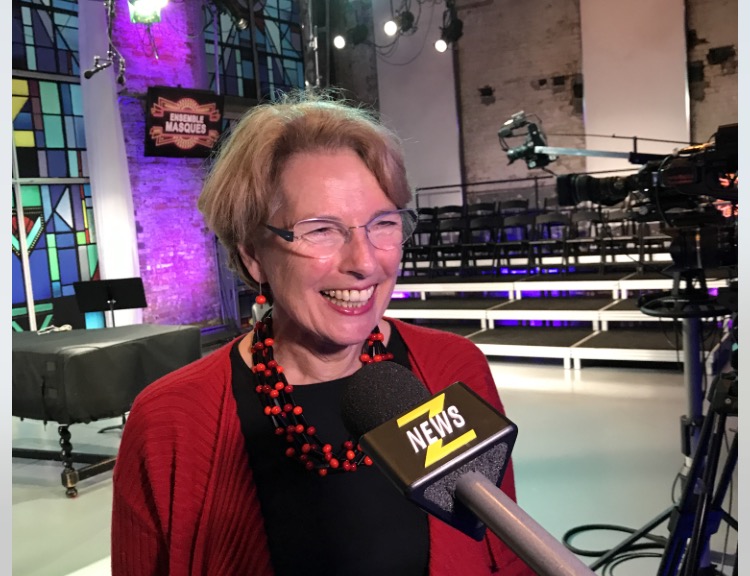 Anne Minors gives an interview to Canada’s New Classical 96.3 radio on how to make theatres sound good, in Toronto, December 2017.

You started out as an architect; what lead you to consulting with performing arts organizations?

Well I started out wanting to be a musician, but I soon realised that I wasn’t going to go too far in that field, so I moved on to architecture. A friend introduced me to some theatre consultants at Theatre Projects (UK), and I started to think about that as a possibility. Four years later they hired me, and 10 years after was the first woman to start her own theatre planning practice.

What are the biggest obstacles to overcome? I imagine there are different parties all having vested interests that may clash with one another.

There are always different priorities to consider, but it’s important to hold on to the key priorities that you and the client have identified at the beginning of the project, and to be prepared to support those priorities. At the same time, we have to be open to technical advances or changes in the project brief. So, on the one hand we have to be firm, and on the other we have be able and willing to reassess as we go along.

There’s a lot for you to consider: costs, a board of directors to please, future audiences members to consider, let alone what the performers want. How do you deal with the stress of all this?

I see. Have you ever been part of an acoustic re-fit? Here in Toronto, acoustician Russell Johnson was retained in 2000 to fix Roy Thomson Hall’s acoustic problems. Fortunately, it went well. Have you been involved with a project like this? If not, how would you go about solving the problems?

Often! Times change, buildings change. I’d say, over the lifetime of our practice, probably half our work will be refurbishment of existing buildings, and sometimes fixing previous work by others. And every project is different, because the issues are different. At the moment, we are working on a concert hall project in England to improve the musicians’ on-stage experience, specifically because they can’t hear each other properly. We had a number of test days with the orchestra trying out different staging configurations, asking the musicians to move around in the space to find their “sweet spot”, and we’ve come back with revised geometry for staging based on their feedback. We’ve reached a point where they are much more satisfied with the acoustic experience. By changing the geometry of the staging, we’ve improved their listening experience and ability to play together well. In Toronto, we’re working on the Massey Hall project which involves, more generally, preserving and enhancing the integrity of the existing acoustics.

I’m looking forward to visiting the re-vamped Massey Hall! You were the go-to person for Koerner Hall. How long did that project take, and have you been to a concert there since?

Koerner Hall and the Telus Centre took about six years, from 2003-2009. And, yes, we visit it often, every time we are in town.

Which concert hall has the perfect combination of great acoustics and great sightlines?

Without sounding too boastful, and I think most people would agree, I’d say Koerner Hall is great example of this.

Another major issue with acoustics is not just in theatres and concert halls, but also in restaurants. Why are so many restaurants too loud, and why aren’t these businesses making it conducive for patrons to actually converse?

Good question. Poor restaurant acoustics are a combination many factors, the most common of which are of low ceilings, hard materials and surfaces, and closely-spread tables. I foresee it becoming more of an issue as the population ages. We know that it can be very isolating when patrons are at a celebration and they aren’t able to feel a part of it. I’m not sure lowering the noise level is high on restaurant owners’ lists of priorities; fortunately, there are some remedial things that can be done on a limited budget and just require thought and care.

I wish more restaurants would tone it down; I dislike shouting when I’m dining out. What is your advice to a restaurant owner on a limited budget to buffer the noise of music, cutlery, and plates?

Call us! We’re happy to discuss with any restaurant that wants to do something about it.

If you would put your architect hat on for a moment. This may seem like a silly question about concert halls, and it’s not about acoustics, but it’s important to women: why, oh why, are there never enough washrooms? There is always a huge lineup, which means all of intermission is spent wondering if you’ll make it back in time. Can you please bring this up with your next client?

Well, firstly, the regulations have improved a great deal in the last few years, so new buildings will have a greater number of women’s facilities than before. (In fact, there was a famous Canadian study done in the 1980s which showed that women take three times as long in washrooms as men, and therefore need three times as many toilets.)

For older buildings, and particularly 19th century buildings, lack of space for enlarging washrooms is usually a big factor, so we look at reconfiguring and updating any possible foyer spaces. It’s all part of the larger accessibility issues that need to be taken into consideration for refurbishment plans as well.

(A small side note: A study in, I think, New York a few years ago looked at hundreds of 19th century theatre programs and noted that the programs were filled with advertising aimed at women. This led to them to determine that while men would go to the bar to smoke and drink, women stayed in their seats during intermission. Given their voluminous skirts and undergarments it was probably too much trouble to use the washroom, and besides their small, tight waists didn’t allow for much eating or drinking anyway. Hence, very few washrooms for women were needed.)

That’s fascinating info to know! I guess I should be glad I’m not bogged down with corsets and hoop skirts. Please define what for you constitutes “perfect acoustics”.

As a theatre planner, I look at a space with musician’s ears, meaning that I try to hear the hall the way the musicians might, as well as from the audience’s perspective. Personally, I have a preference for “immersive sound” – sound that reaches my ears from beside and behind, as well as in front, enveloping me – so, I look for opportunities to place the audience within a space so that sound can reach the surfaces of the hall that are important in creating this overall envelopment.

To see the original article please click the following link